Sunshine, melting ice and snow, AND 50 degree weather at last! Chance was able to finally enjoy an entire day outside walking around without slipping and sliding ( and without me holding my breath for fear he would fall.) 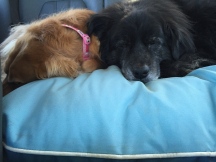 Usually, when I arrive at the barn, I will go and see Chance before Lucky to keep him from getting upset.  But today when I got there I didn’t see Chance right away so I decided to bring Lucky in from the paddock.  The next thing I know Chance is standing at the top of the hill staring at me.  I tried to play it cool 🙂 by talking to Chance and continuing to walk Lucky up towards the barn.  That did not work.  Chance freaked out!  He began huffing, Lucky bolted, and Chance refused to walk forward because that would mean Lucky would be out of his range of vision (apparently he thinks this donkey who is maybe up to Chance’s knees in height will attack him).

I finally got Chance to the barn when ice fell off the roof right next to him.  He jolted forward into his stall and all I heard was a bang- Chance hit some part of his body against the stall entrance. I didn’t see any evidence of an injury so I let him calm down for a bit before I began to groom him.  Well, that did not happen….he was pacing and huffing…so I decided to give him some Quietex to help him to calm down and prevent him from hurting himself.  20 minutes later Chance was much calmer.  Although, if you look at the photo, he looks a little drugged.:)

Chance has put on a bit of weight and even though he still needs to gain more, I think he is looking much better.  I began 1 cup of Rice Bran on his food once a day for a week and will up it to 2 cups after.  I am hoping that plus the alfalfa and hay mix, Chance will get some meat on his bones in no time!

The next task, aside from putting on weight and engaging in rehabilitation exercises, is to enhance Chance’s immune system.  Due to his age, medical history, the rehabilitation to help rebuild his neck and hind muscles, and the medications that he has been receiving for EPM, I was advised to add a probiotic to his diet.  The stomach accounts for 60% of a horse’s immune system.  Basically, if the gut is off the chances of a horse contracting a virus, disease, or even injuring himself are much higher.  Not only does the immune system help to fight off illnesses, cancers, etc, it also helps with weight, stress responses, and the effectiveness of treatments.

So, I began to do some research and found some really incredible information which I will talk about in the next post!