A handful of months ago I decided to get my horse, Chance, a companion. He has always loved miniature horses but we already had one at the farm (with a very strong personality) so I decided on a miniature donkey. That is when I found Lucky.

Well, Chance did NOT like Lucky from the moment he saw me leading Luck off the trailer. Chance paced and neighed incessantly until he actually broke into a sweat!

Today Lucky decided to escape out of his stall and run out to where Chance was. At first Chance just stared, then he went after Luck but he stopped once Luck moved a few feet away. Slowly, Luck inched his way closer and closer until he was a handful of feet away from where Chance was grazing. Chance  didn’t seem to even care.

Fingers crossed this is the beginning of a forced, we-will-put-up-with-each-other friendship. 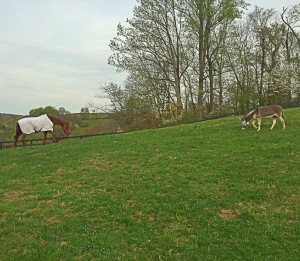 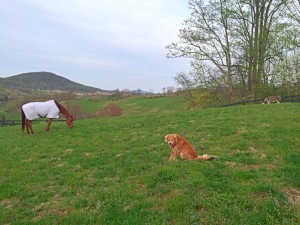