Well, I hate to say it but Lucky had to get castrated….after trying to keep him from relentlessly mounting the miniature pony, there was no other choice.

He he was a trooper through the entire ordeal. He was given the standard doses of antastesia medication and was walked outside to a soft and grassy area to lay down. He wobbled a bit and was guided down gently to avoid additional stress or injury.

Once he was laying down his face was covered and one leg was tied with a rope and someone held the rope to ensure the vet was not kicked. The castration procedure began and lasted about 20-30 minutes from start to clean up. 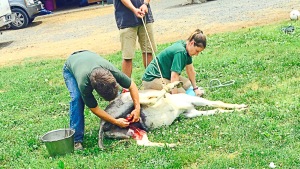 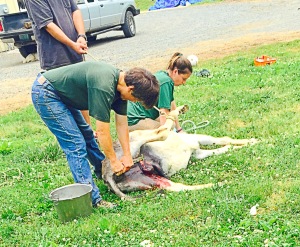 Once the procedure was completed the vet continued to try to keep Luck laying down and calm to aid in minimizing the bleeding. However, Lucky was ready to get up even before he was completely awake. He was hand walked until stable enough to walk around alone. The vet explained that it was better for him to walk around instead of standing in a stall.

I brought him in once to clean him up a bit more and add SWAT around the wound to keep the flies off.  This was only accomplished by me leading him in while begging for him to “just come inside for a minute” and promising he “could go right back outside.” While I was pathetically negotiating with Lucky, Chance came up behind him and kept nudging him lightly in his hind end! It was the cutest thing I have ever seen! After I got him inside and cleaned him up and applied more ointment I let him back out.

However, later around dinner time, when I tried to get Lucky to come inside again to eat he decided to get sneaky.  He decided to go into stealth mode and “hide” from me so that I wouldn’t try and bring him in. (Pictured below). He actually went into a random paddock that he isn’t familiar with and stood there quietly and barely moving. Just watching me out of the corner of his eye while I called for him. 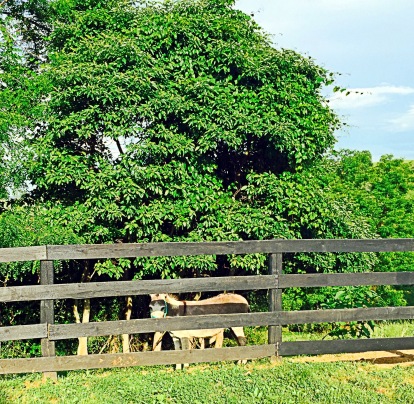 Luck stayed out until about 10pm and when he came inside for the night SWAT was reapplied and a dose of Bute was given. He refused to eat his dinner but gladly inhaled carrots and drank some water.

This morning his feed was all gone and there was no apparent swelling or increased discharge thankfully. According to the vet it takes about a month for the testosterone to be depleted after castration. I’ll be interested to see the changes, if any, that occur as a result. 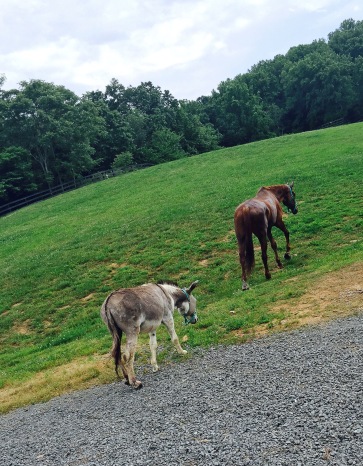