My senior Belgian Draft mare has a chronic condition where her stools are relatively solid but after having a stool, she passes fecal liquid separately, Her tail and hind end, and legs are covered. Initially when she came to me she had loose stools and the vet did a fecal and we put her on Biosponge. Her Fecal Sample showed minimal infestation and the Biosponge did not do much. Over time, her stools became more solid but the liquid continued. Now, after being with me for about 6 months we are still having this issue.

The underlying cause of FWS in horses is not known at this time and there are many theories as to why some horses develop it. A group of researchers in Germany set out to explore some of the proposed theories and discovered that neither dental disease nor a heavy parasite burden seemed to be associated with FWS. However, it was found to be more likely to occur:

However, the article also noted that due to FWS being a relatively new diagnosis, more studies are needed to look at the role stress, nutrition, and potentially, other factors in the development and management of FWS.

Most veterinarians approach the diagnosis of a horse with FWS similar to one with diarrhea or loose stool. That is, they start by taking a thorough history from the owner, then perform a complete physical examination with special emphasis on the digestive system, and finally may recommend specific tests to evaluate the health of the horse in general and the GI tract in particular. It can be helpful to confirm the presence of soiled hind limbs and tail as well as dirty stall walls and bedding. While on the farm, the vet may want to walk through the regular feeding and management programs including turnout and herd status.

Treatment and Management of FWS

Although there is no standard treatment or set of recommendations for the care and feeding of horse suffering from FWS, all potential causes for disruption in the GI system should be addressed, including social stress.

Tilly came to me from a slaughter auction in Texas after 17-ish years as an Amish workhorse.  She was thin (she still is), sick (upper respiratory infection) had cracked hooves, had never had her teeth floated (they made a horrible grinding and clicking sound when she ate), and apparently had never been clipped or bathed or worn a blanket.  I do not think she had ever even had a treat (she still won’t take an apple or carrot). 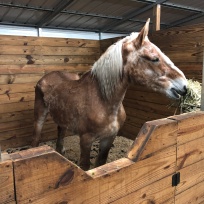 Tilly on her way from Texas slaughter auction 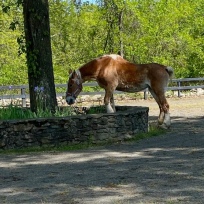 When Tilly arrived in Virginia

Tilly’s feet when she arrived 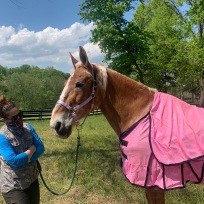 Tilly on her way from Texas

Tilly when she first arrived in Virginia

Her feet upon arrival

Getting her teeth and feet done

Tilly after being clipped and bathed!

BEST Guide to all Things Colitis, Diarrhea, and Intestinal Health

What Comes Out, What Goes In